We turn now to Charles Augustus Dean. Mr. Dean was born in Shrewsbury, Massachusetts on June 15, 1844. When the Civil War broke out, he ran away to join the army, specifically Company H, 8th Vermont Voluntary Infantry.   After being mustered out in 1864, he settled upon employment in the fledgling paper manufacturing industry, first in Cincinnati, Ohio, and then Rochester, New York. In 1875 he married Minnie Palmer in Woodstock, Connecticut and moved to Boston where he became manager for Hollingsworth & Whitney.

He advanced to the position of Vice President of the company and served in that capacity from 1882 to 1892 whereupon he became President. Under his direction the company increased its capital by nearly tenfold and its annual production by twenty fold to become the largest manufacturer of Manila paper and paper bags in the United States. In 1911, he retired from the Hollingsworth & Whitney presidency but continued to serve as director of the company.

The Deans spent winters in Captiva, Florida, and in 1903 they bought an eighty foot steam yacht that they christened “Aroostook.” Such was Mr. Dean’s love of salt water fishing. In the summers they retreated to a rustic camp on Moosehead Lake where, it was reported, Mr. Dean went “to get away from everything.” Perhaps not entirely surprising the camp was located at Kokadjo where Hollingsworth & Whitney had its lumbering operation. 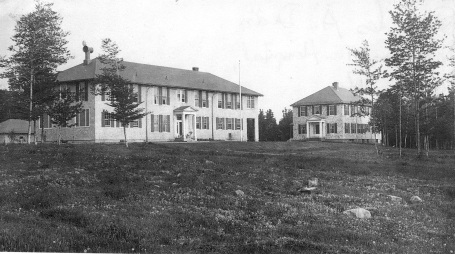 During his tenure with Hollingsworth & Whitney, Mr. Dean, and his company, financed the construction of both a YMCA and a hospital. He donated $250,000 to build and endow the hospital and $150,000 to build the YMCA. Interestingly, it has been reported and recorded that these facilities were built for the benefit of his employees although they also greatly benefited the entire town and outlying villages. The hospital, which now bears his name, was formally presented to the town of Greenville on August 1, 1917, and continues to serve the community faithfully to this day. The YMCA which was once located on what we know as the Junction Wharf is but a fading memory and the subject of a collection of black and white photographs in the archives of the Moosehead Historical Society.

Charles A. Dean died on March 30, 1921 while cruising his favorite fishing waters off the coast of Florida aboard the “Aroostook” yet he continues to live in the hearts and minds of those who are familiar with, and appreciate, the rich history of the Moosehead Lake region.