In part three of “Remembering our Early Benefactors”, we’ll briefly examine the enduring contributions of Mr. Louis Oakes whose name is familiar to residents and frequent visitors alike.

Louis Oakes (1871 – 1964) was born in Sangerville – Maine, that is – and moved to Greenville in 1907 where he maintained his residence for the remainder of his days. He attended Foxcroft Academy and the University of Maine where, evidently, he developed a particular interest in surveying and forestry. In 1898 he married Eva Dunham and had one daughter, 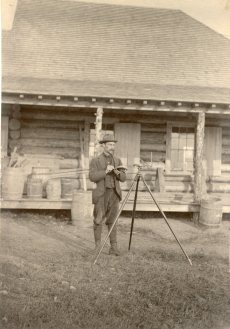 Edith, who in turn married C. M. Hilton. During his early years, and reflecting his commitment to forestry, he was appointed the first Chief Fire Warden by the Maine Forestry District upon its inception circa 1900.

Of particular significance, Mr. Oakes financed exploration efforts conducted by his brother, the famed Sir Harry Oakes, who ultimately discovered what turned out to be a $250 million gold mine in Ontario. Louis shared in his brother’s wealth, much of which he invested in his local community for the benefit of its residents. Over the years he acquired large timberland holdings and served as director of two paper companies, including Hollingsworth and Whitney where he served as superintendent until his retirement in 1951.

One of his most cherished undertakings was the $500,000 Greenville Consolidate School which he gave to the town in 1935. He further established an $80,000 trust fund with the income to be used for certain school departments and repairs. Mr. Oakes was also intimately connected with the Squaw Mountain ski area, believing in the great recreational possibilities of ski development, especially for young people.

He was named one of the Outstanding Citizens of Piscataquis County in recognition of, among other contributions, his commitment to the community which included terms of service as trustee of the Guilford Trust Company, C. A. Dean Hospi

tal, and the Shaw Public Library.   He was awarded an honorary Doctor of Law degree from the University of Maine in 1953, and in 1954 an honorary degree from Colby College.
When he passed away in November 1964, his obituary in the Piscataquis Observer read simply, yet eloquently, “Louis Oakes: Builder. If you seek his monuments, look around you.” His beneficiaries included his grandson, the late Louis Hilton – one of Greenville’s most respected philanthropic citizens, and Foxcroft Academy to which he left a bequeath of $450,000.