Julia Crafts Sheridan was born February 5, 1891, the only daughter of Arthur A. and Rebecca W. (Eveleth) Crafts. She was a life-long resident of Greenville. She died in 1970 at the age of 79 in Sarasota, Florida. Private funeral services were held at her home in the Junction. She is buried in the family mausoleum in the Greenville Cemetery.

Julia Crafts Sheridan was her father’s daughter, outliving her only sibling, brother Oliver, who succumbed to illness when he was 16 years old. Julia was closely engaged with her father in family business matters. She is most remembered for overseeing the management of the Squaw Mountain Inn, which her father purchased when it was the shuttered Moosehead Sanatorium.

Her father had the sanatorium completely remodeled and re-opened in 1916. Julia was married to Rennie Philip Sheridan of Syracuse, New York there in a big gala ceremony in 1923. The following year, Julia and Philip began managing the inn. The couple went to the Princess Hotel in Bermuda to learn the hotel business, bought the inn from her mother after her father died, and Julia managed it until 1965, when it was sold to a group of investors.

Her interests were wide and adventuresome for the day. She was independent and career-oriented, maintaining a retail business, the family real estate, and participating in political and public affairs. She also was a great philanthropist, smartly contributing to many campaigns, both near and far. She and Philip had no children.

When she died, the Town of Greenville, and many local entities, including Shaw Public Library, C.A. Dean Hospital, The Ready Workers of the Union Evangelical Church, and lists of other organizations outside of Maine benefited from her charitable bequests. She was a driving force in the successful incorporation of the Moosehead Historical Society and became an essential benefactor, willing both her home and an endowment for its upkeep to the small organization, which continues to aid in its operations today. She also willed her waterfront property in the Junction to the Town of Greenville, for the purposes of creating a public park, and Red Cross Beach, near the Masonic Temple, is located on another portion of Crafts Sheridan land. 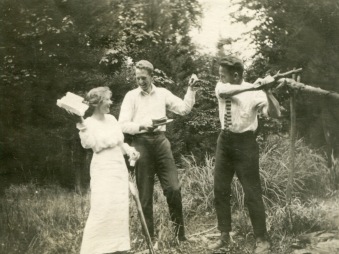 Julia Crafts Sheridan hams it up with two unidentified friends.