Note: Long-time Historical Society member Bill Meyer began his career as a fisheries biologist here at Moosehead and completed it many years later as a federal director on the west coast. He continues to keep up with friends and news here. Here is his account of the Mystery Man hunter from the July issue he correctly identified as Rockwood native Malcolm Maheu. 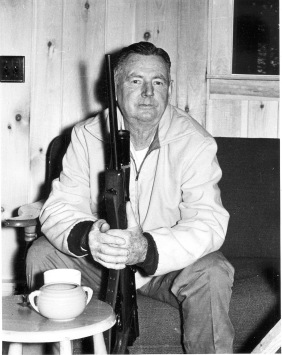 The “mystery Man” in the July issue of Insight was none other than Malcolm Maheu of Greenville.  A native of Rockwood, Maheu was a long-time pilot for the Maine Warden Service.

I knew Mac more as a seasoned, terrific pilot than a hunter. For years he was a warden pilot for the Maine Department of Inland Fish and Game, Aviation Division.

He had many hours of flight experience and was a delightful gentleman. He taught young WWII men how to fly from a base in Nebraska and knew northern Maine like the back of his hand. Mac was cool in adversity and relaxed in normal flight.

We once had a canoe come loose off the float while in flight almost immediately after taking off from a lake near Millinocket. Mac did a 180-degree turn to keep the canoe from banging into the plane’s fuselage, then landed down wind in the lake we had just left. The metal propeller had chewed off the end of the canoe, creating a “sugar scoop” effect, spinning the plane when we landed.

He used a hatchet to pound the prop back into shape, called the Greenville base to report what had happened and where we were, and took off. When the instruments did not vibrate excessively, he returned for me.

Mac and I saw caribou swimming in Prong Pond, just north of Greenville. Mac was an interesting guy and a superb pilot.